Is Everyone Impoverished by a Low Cost? 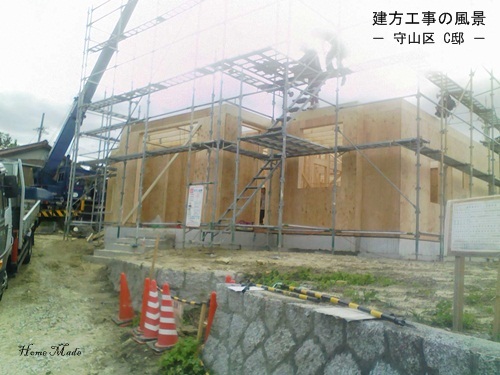 Recently, a framer said to me, "The wages for framing has started becoming unable to live on."

Framing is a basic construction where they build the structure(framework) of a building. To assemble and install big pillars, walls and beams results in several framers' working on-site 1 week through 4 weeks.

The reason for having a wide range of the period is that there is a difference between the case where walls and other things are built in advance in a factory and brought, and where all of them is built on-site.

In recognition of not wanting to have exposed the frame to the rain over a long period of time, these days the way of building it to some extent in a factory (panel construction) is the main current; but the time when a path leading to a site is narrow and a large-sized crane and a truck don't come in results in framers' building it from the ground up on-site though it takes time (conventional method of construction).

Yet I hear because a sum of money proposed by builders to subcontract framers and carpenters has started getting smaller in this day and age, the wages paid to the framers who come and help on-site is decreasing a net income of the main framer who made a plan.

I probably think the framer doesn't actually live so uncomfortably, yet framers and carpenters who accept the work of low-cost builders are going to have a harder time.

I hear if things don't work out, their wages are about the same as company employees' salary.

Now the regular wage for framers and carpenters is about 20,000 yen a day. If they work 25 days, they get 500,000 yen. When you hear it it sounds as if they earn more than the public, but how about it if you think of social security deduction, traffic expenses, a tool bill, a vehicle bill, consumption of strength, not any bonuses?

They work a 25-day month, which means they aren't on a five-day week, and if you think about of course not including the Bon holidays, the New Year holidays, holidays and unworkable days because of rain, to make 500,000 yen a month is pretty difficult.

Of course the case of not full-time employment but a contract which has decided the total price usually gets all the more profitable depending how hard they work. That is because if they finish construction sooner than usual because of reporting to work early and overtime work, construction period is short, so the price of the number of days gets more, but because the contract price is itself the very lowest, the work of framers and carpenters who do quickly and want to earn money eventually gets sloppy.

Customers ought to be satisfied with being able to build their house affordably, but site workers who execute it also have their living to concern themselves with. If a low cost puts a strain on their living, it is plain that it will also put a strain on building a house.

There are no present contractors including framers and carpenters who excessively demand profits. Few builders like us who have been putting them together ought to be thinking of trying to make a large profit, too.

There was news that SHARP Corporation has recently run a huge deficit.

That impoverishes in turn Japanese society too, and leads to price wars here, there and everywhere. These are the realities of deflation. After all, all of us lose money.

Please don't forget that has been happening also in the present housing industry.

Going through grinding competition is necessary, but I believe the intense competition more than it could put industry and society themselves out of business.

Budget may sometimes be tight, but despite all that contractors and builders receive moderate compensation and do quality work. And then, they both thank each other. Wouldn't that has been originally what building a house ought to be?
Posted by Home Made Company at 12:12 PM 3 comments:

LEDs in the kitchen 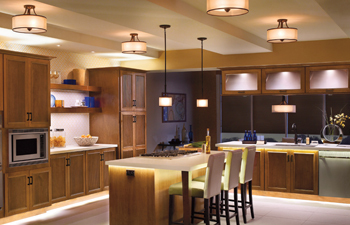 There is a large L-shaped kitchen with a modern dining counter.

The dining counter is made of a slightly transparent material and LED lightings are hid under the counter.

In that way, the counter itself slightly emits light and it creates a wonderful atmosphere.

Also, above the cabinet in front of the counter are display shelves and LED lighting is installed under the shelf, too.

And over the sink by the windows, fitting 3 LED downlights in succession designs to secure rhythm and lighting at hand.

The plan never costs a lot, but the design seems high value in terms of wealth.
By the way, all the  lighting fixtures are produced by Kichler Lighting.
Posted by Home Made Company at 11:50 AM No comments:

A Kitchen with a nice outside view 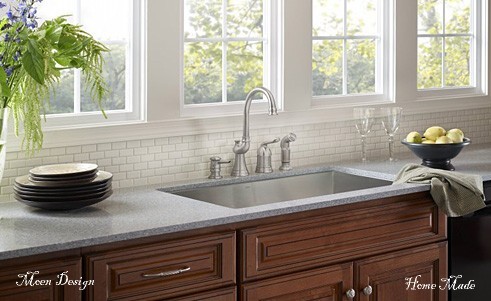 Feeling the comfortable morning sunshine through the kitchen windows, you will enjoy the time preparing for the breakfast table.

You may want to open a window slightly to hear birds singing lovely songs in the fresh morning air.

A wooden cabinet in the classic color of dark brown.

No hanging cupboard was planned as to provide enough clearance around your head so that you could enjoy the comfortable open space.

Both the clean countertop of granite in light gray and the kitchen walls coordinated with a color scheme of white brings you a fresh feeling.

The faucets include a shower head and a soap dispenser.  You will feel pleasure when you wash the dishes.

Oh, I must tell you that the material of the faucets is designed to resist fingerprints and water spots which is another great feature of them.

Also I can tell you that an oxidized silver finish is selected for the material of the cabinet’s handles, and they match well with the satin-like faucets. It’s a tasteful design concept.

But usually it’s very difficult and people give up.

Only Home Made, who is a direct importer of foreign houses, can make it possible.

Posted by Home Made Company at 11:28 AM No comments:

The Feeling of Taking an Open-air Bath ~ WISH 01~

Look at this!
It is fairly difficult to design a huge glass window like this in Japan where earthquake-proof performance is required. But how wonderful this sense of space is!

In Canada, bathtubs are usually recognized as an artistic addition to a room’s interior.

Therefore we often see a bathtub in the corner of the main bedroom, but this room is likely a training room or a big bathroom.  (In Canada, a bathroom is a multipurpose space where a powder room, a toilet, and a room for taking a rest are united.)


As you see, the simple contrast of dark brown and white creates a stylish atmosphere.

This tub is a stand-alone system, and it doesn't have a jet bath function.
On the other hand, it is a roomy tub, standing 60cm tall and 150cm wide.
Therefore I think 2 adults may be able to enjoy this tub at the same time by facing each other.

And you can see a shower-faucet is standing on the floor beside the tub.
This is another important art object.


If it's possible to use such an open and large space for taking a bath, surely our life would feel so rich.

This would make you love to take a morning bath even every day, wonuldn’t?

A Natural and Open Bathroom 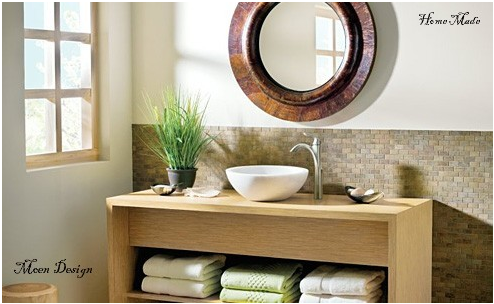 It’s nice to find a neat washbasin in the shape of a white bowl on a wood
bathroom cabinet.
The cabinet is made of straight-grained board from light oak timber.
It’s designed to diminish the strong characteristics which is usually seen in oak
products.
And, what is unique is that you don’t see any cabinet doors which would be used
in normal designs. We intentionally omitted the doors for displaying towels and
bathrobes on the shelf.
It's also interesting to know that the faucet has been fitted with an optional
pedestal to adjust its height to the deep washbasin. That contributes to you to
the faucet standing in a tall and relaxed arched form.
Soap dishes, hand towels, and some other items, will all be put on the counter of
the cabinet.  By coordinating the color and design concepts into the items, you
will be able to have a unified and stylish-feeling space instead of an image of disorganization.
Looking at such an open designed Bathroom as in the photo, everyone will be
aware of the owner’s good taste in their sense of coordination, and the laid-back
life style which can be enjoyed there.

Behind the cabinet, beige-colored mosaic tiles are put on the wall until
waist-high.  This achieves good trading of color change from the design
point-of-view, and at the same time the tiles work to protect the wall from
splashed water.

Finally, the mirror on the wall is provided with a round frame in dark brown, as
if to appeal itself in the room.

People who look at this mirror will feel an aesthetic appreciation of the selector.

Posted by Home Made Company at 1:01 PM No comments: 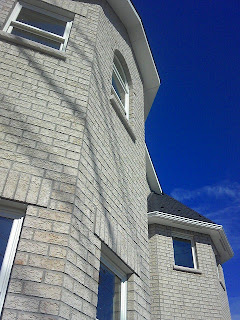 Our new house in Gifu city will be opened for public as scheduled.

It reminds you something like that in medieval times in Europe, which is well suited for pink-gray brick cladding that Canadian bricklayers installed.

And we installed the real drywall in interior like North American homes.

If you have any question, do not hesitate to contact us.

These are Also Red Bricks. -Vermont- 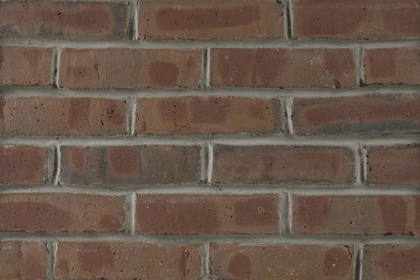 The exterior brick has a Waterstruck texture.

Is it named this because there are signs that look like the brick has absorbed water, or that jets of water has made this texture?
Either way, even a flat surface type of brick can bring out this antique impression.
This brick (Modular) is a little smaller than the MAX size we usually use. It's 7-5/8'' long and 2-1/4'' high.

There are as many as 10 small holes to put a rebar through it, but this may make it difficult for a thick rebar we use to get entangled with the mortar tightly.

In that respect, this Hanson brick doesn't seem to be suited for Japan. 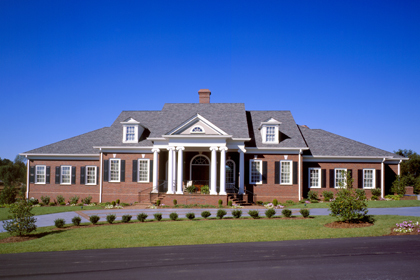 But this colour which looks like having some dark brown has a more sophisticated atmosphere than a usual red brick, wouldn't you say?


A picture of the brick's building looks bright as it gets sunlight, and the change of colour also gives a very good effect.
They are indeed genuine Canadian laid bricks, aren't they?
Posted by Home Made Company at 9:47 AM 2 comments:

Details of Home Made, Home Builder in Nagoya, Japan

About Home Made Company

Home Made Company
4-905, Iwasakidai, Nisshin city, Aichi Pref., Japan
Home Made is a home builder near Nagoya, Japan. We can build a real western style house like your home town. When you plan a house building in Japan, please contact me by E-mail or through my web site.